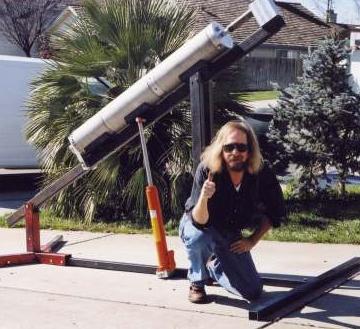 BALLS stands for “Big A** Load Lifting Suckers” and is the premier Experimental Rocket Launch event in the US. It has been going on for 33 years and is held annually in the Black Rock Desert under the rules of the Tripoli Rocketry Association, Inc. https://www.tripoli.org/ It was Robert’s dream to build and launch an H2O2/kerosene rocket from there one day. I’ve been to one. It’s not for the faint-hearted…..

In honor of Robert, after his untimely death, the NSS named its top chapter award the Robert Compton Chapter of the Year Award.

Robert was born in Ladysmith, Wisconsin, December 10, 1943 and died April 19, 2006, at age 62.  He is survived by his mother, Gladys Compton, presently residing at College Oak Nursing and Rehabilitation Center in Sacramento, CA; an uncle, Branch Compton of Matteson, IL; his mother’s cousin, Stan Noyes of Citrus Heights, CA; a sister-in-law, Grace Compton of Reno, NV; nephews and cousins.  He was preceded in death by his father, Herbert, and his brother, Marvin Compton, of Reno, NV.

Growing up on the family dairy farm in Bruce, Wisconsin, he graduated from Bruce High School in 1961.  He received a degree in physics in 1965 from New Mexico State in Las Cruces.  Employed as an engineer for 22 years by Coherent, Inc., in Auburn, CA., he retired six years ago.  Robert was also a long-time member of the First Congregational United Church of Christ in San Francisco, CA.

Robert wrote a unique beginning physics book entitled Design Notes Log, G.O.D. (an acronym for General Operations Director).  His book has been placed in many libraries and schools.

Passionate about rocketry and the future of space exploration, Robert loved to travel to space conferences.  From 2004 to 2006, he served as president of the local chapter of the National Space Society, also known as the Sacramento L5 Society.  During his tenure, the chapter received numerous awards, including the NSS Chapters “Explorer Award” in 2004 and 2005.

Robert was much loved, and he will be greatly missed by family members, friends and colleagues.  He is laid to rest in Bruce, Wisconsin, near his father.