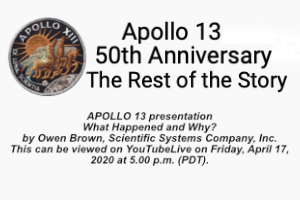 All are invited to view the APOLLO 13 presentation: What Happened and Why? by Owen Brown, Scientific Systems Company, Inc.  This can be viewed on YouTubeLive on starting  Friday, April 17, 2020 at 5.00 p.m. (PDT)

Twenty-five years ago as part of a Lessons Learned program effort Owen Brown was developing at Space Systems/Loral, he put together a lecture retelling the dramatic events of Apollo 13. Later on, this presentation became part of the American Institute of Aeronautics and Astronautics (AIAA) Distinguished Lecture series.  Between AIAA dinners, NASA center safety briefings, Air Force launch safety briefings and other miscellaneous storytelling sessions, Owen has presented this lecture more than 100 times!

Please join Owen on the anniversary of the successful return and landing of Apollo 13 as he streams the lecture for the first time on YouTubeLive. The talk provides technical details which answer questions about “What happened?” Most importantly, this seminar provides the answer to “Why did it happen?”